While I wouldn’t say I’m completely in tune with the spirit world, Rett continues to knock us over the head with his signs. I find it fascinating that his angelversary last year was on the full moon and his sister was born on the new moon two weeks later. Full moons are all about letting go, new moons represent new beginnings. Rett lived exactly 301 days. Today, January 2nd, 2017** is the exact day Everly turns older than Rett ever was. While I am so grateful to have a healthy child now, it just doesn’t feel like this should be an accomplishment or a day to celebrate. Instead, I look at it as another sign from above. An evolution of sorts. Time to begin again at the start of a new year. Time to resolve to change focus, change paths—and feel good about it.

His birthday, the anniversary of his death, and Christmas will come each year, but this single moment in time is one that holds a lot of power. From now on we can’t really compare Evie to Rett. The approach of this imminent day affected me a lot, as I watched my daughter grow to her brother’s last age—becoming more and more mobile  and eating all kinds of food, two things Rett never got to experience. I remember just days before Rett passed giving him a fruit smoothie, and he loved it. That made me so happy. At least he got to taste something deliciously sweet once in his life. And while he could never explore from his tower of tubes and machines and medicines, he did learn to be a pro-bouncer.

As many bereaved parents will attest, year two can be even harder than year one. I have found this to be definitively true. Despite the bundle of joyousness that is Evie Jane, and the consistent success of Rett’s Roost, the last few months have been more difficult than we ever could have expected.

Last summer at our first bereavement retreat, Jim made the difficult decision to accept a job in Chicago. It was a big deal to move our family out to the Midwest, but we took the challenge in our life as a leap of hope and necessity. It seemed this was the change we needed to move forward in our grief. Jim was hired by Time, Inc/Fansided because of his edgy, eccentric style of writing, as well as his attention to detail (ie., grammar policing). We know that they were happy with his work from the beginning–writers liked him as their editor-in-chief, his officemates enjoyed his presence, and the website was getting more traffic than before.

Suddenly, however, hope all came tumbling down, after he published a piece that received a miniscule amount of troller backlash on Twitter. Without any warning, someone high up a Time Inc pulled the plug on Jim’s position. We’ll never understand why this happened, since no one at Fansided reached out to speak to Jim about why he lost the job we moved halfway across the country for after two months of honest, dedicated effort.

So as the anniversary of Rett’s diagnosis and major surgery passed for the second time, and the holidays came and went without our two year old son, we faced another major decision and transition to leave Chicago. It’s been so hard to pack up (again) and leave a city that we were really excited about making our home. The fall in Chicago was beautiful, the Cubs won the World Series, we loved our neighborhood and exploring all the other pockets of culture and delicious food. Evie, and even Lulu our dog, seemed to fit right in to an urban lifestyle. 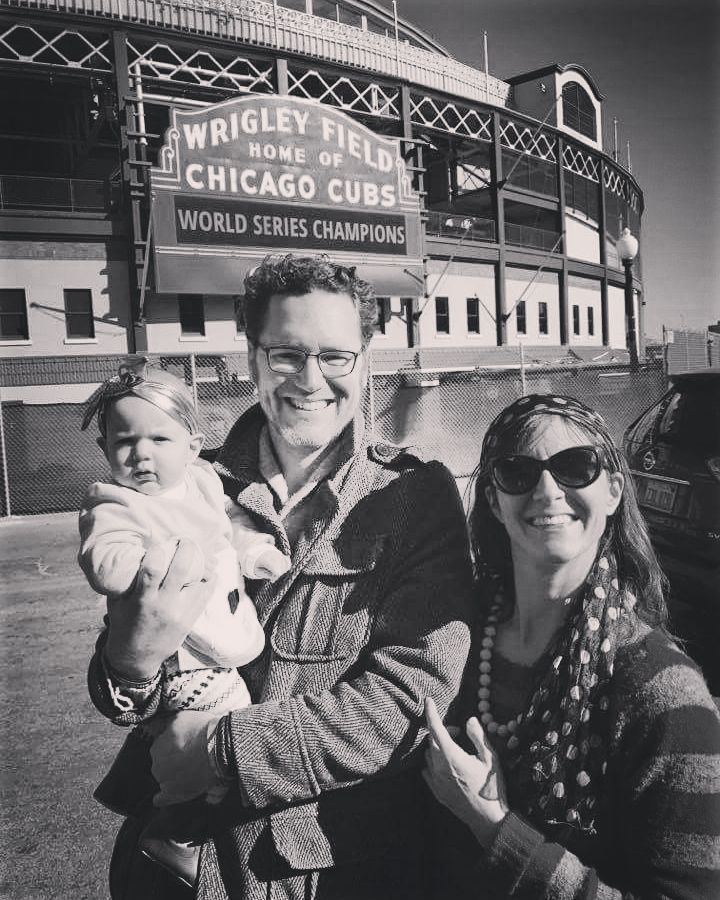 It’s tough to look past the stream of bad luck that has cursed us ever since Rett’s cancer. Sadly, it feels like we are still living in its haze of suffering. We really don’t want to reach out to our community for more sympathy, since you’ve all given us so much of your love already. But our story must be told. Jim has stayed quiet about this loss but the pain that this huge corporation caused our family is immeasurable. And I just wish that whoever made this impulsive decision from their corner office in NYC could feel themselves the stress we have felt.

After losing Rett, I picked up my shattered heart and kept going. I started Rett’s Roost and brought another child into the world. I’ve heard so many times, “You are so strong.” While I do take that as a compliment, I know in my heart it’s not always true. This fall has been a true test of my strength and faith in goodness; I still feel beaten and bitter. I’m not any stronger than any of you. You would all have taken care of your child like we took care of Rett and you would all have carried on if you lost your child like we did. I live in a world of bereaved parents who did exactly what we have done. Sadly, we are not a rare breed (7 children die of cancer each day in the US).

I want to believe that we can create a better reality just by focusing our mindset on what we want. But, in these last two years, I’ve met so many people that are also living through tragedy and bad luck. Many of these people already live a life of good deeds and positive thinking. So, in my mind, I oscillate back and forth–observing how unfair life is and adjusting my negative reaction in the present moment to focus on a brighter future.

I’ve seen many people commenting on social media about how difficult 2016 has been. All the influential people we’ve lost and the surprising election result are universal examples; but I even feel on a personal level that the cosmos have been misaligned for most. Even though Jim has to remind me again and again, I know we are all in this together and that he and I aren’t suffering alone.

Our wonderful Rett’s Roost photographer, Caitlin, posted a Rumi quote the other day, “You have seen my descent. Now watch my rising.” I can’t say when that rising will occur, but all I can do is envision it happening now, as we embark on 2017, as our daughter continues to thrive. This significant day when Evie outlives Rett is hopefully a turning point for us. I’m trying to look at it that way. It’s also a new year, where my intention will be to create the life I want to have by shifting my perspective to what could be rather than what is not.

Our little detour in Chicago was not easy, but it was an adventure. Hopefully we can look back on it in a few years and realize that this suffering we endured was only a glitch in achieving the life we deserve. And that our efforts to be good people, with open hearts, close friends, and a modest life will eventually create an easier path forward. I am certain our family will get through this time and emerge in a place of solitude, for a while at least. Please, hold us in your hearts until we are there.